"Now every day is the best day of our lives!”

Victoria was 18 months old when she began her battle against cancer. She was victorious in that battle because she received the very best care -- and because of the support of friends like you.

Victoria, the second daughter of physicians Maria and Fernando Padilla, was born full term and healthy. She was an easy baby -- happy and always smiling.

One day, when Victoria was about 18 months old, Maria was giving her belly an affectionate tickle when she felt a mass in her abdomen. Her mind raced. She prayed it was something benign, but as a doctor, her training said otherwise.

Maria and Fernando rushed Victoria to Texas Children’s Hospital to be evaluated. That’s when their worst fears became a reality. Victoria had stage III hepatoblastoma, a rare liver cancer affecting only one in a million children.

“As physicians, we were very concerned,” Maria said. “As her parents, we were devastated.” Stage III meant Victoria’s tumor could not be surgically removed. She’d need to undergo chemotherapy, and she might need a liver transplant. The thought was almost too much for Maria and Fernando. “We started to imagine a very different life for her...” 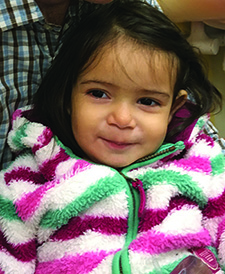 One thing gave Victoria’s frightened parents comfort: they had complete trust and faith in the doctors at Texas Children’s and knew without a doubt that their little girl was getting the very best care possible.

Maria and Fernando are immensely grateful for the special dedication and cohesive team approach Victoria’s caregivers demonstrated. They marveled at the level of communication, collaboration, and continuity of care. For these two physicians, the excellence they found at Texas Children’s meant they didn’t have to “wear our doctors’ coats,” Maria said. They were able to put their faith in Victoria’s team and focus on being her mom and dad.

Victoria’s treatment wasn’t easy. Just a toddler, she was often frightened and sick. Maria remembers the long, horrible weeks of severe vomiting and nausea that made her little girl weak and listless. “We were afraid for a long time,” Maria said. “We didn’t know where our happy baby girl had gone.”

But there were beautiful memories too. Maria woke up in the hospital on Christmas morning with Victoria in her arms -- not feeling sad or homesick, but blessed and cared for. There were also the many small kindnesses from nurses and doctors -- and from people like you. Maria said Victoria was put on the liver transplant list for 24 “scary” hours but was quickly taken off when her medical team determined that her tumor could be surgically removed after all.

What a gift Victoria received on the day of her surgery! Surgeons carefully removed the whole tumor. The operation went perfectly, and this child with a rare and potentially deadly cancer made a speedy recovery.

Maria believes with all her heart that Victoria was blessed to be at Texas Children’s. Today, her cancer is in remission. Her hair is growing back -- a sure sign, according to her big sister Olivia, that she’s better. Victoria’s smiles have returned, along with her joy. “Gradually, our little girl is coming back to us.” said Maria.