At 20 weeks gestation, Leigh Ann Cribbs’ parents received news that no parent ever wants to hear: their daughter had hypoplastic left heart syndrome.

In this rare and complex birth defect, the left side of the heart is unable to effectively pump blood to the body; instead, the right side of the heart must do all the work. Hypoplastic left heart syndrome is treated by medication to prevent closure of the connection between the right and left sides of the heart, followed by either surgery or a heart transplant.

Leigh Ann was born on March 9, 2017, and within her first week of life she underwent a major surgery called the Norwood procedure -- the first of three staged heart surgeries -- to create a new functional systemic circuit. 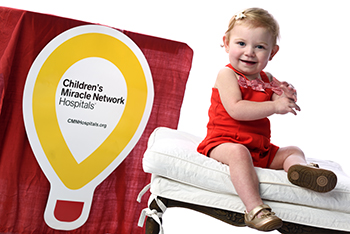 A photo of Leigh Ann Cribbs

Almost seven months later, Leigh Ann was released from the neonatal intensive care unit at Texas Children’s Hospital and was able to go home for the first time.

“Now that Leigh Ann is home, she is fed throughout the night by a gastro-jejunal tube,” explains her mom, Mandi. “She loves to eat anything, except vegetables.”

The goal is for Leigh Ann to be mouth-fed by the age of two. Mandi notes that though her daughter’s health is better than ever, she faces one more open-heart surgery in the next one to two years. Leigh Ann’s next surgery comes with many risks, including the possibility of organ failure.

“The left side of a healthy heart pumps blood to the body, and the right side pumps blood to the brain,” Mandi explains. “The right side of Leigh Ann’s heart is doing both jobs. Her liver and kidneys are the last place for the oxygen and blood to reach, which could cause problems later in life. A heart transplant is always an option, but her native heart will always be the better heart, even though it is not fully formed.”

If Leigh Ann were to receive a heart transplant, there’s a chance that her body might reject the new heart. The oldest person living with hypoplastic left heart syndrome is 30 years old. Ultimately, the Cribbs family hopes and prays Leigh Ann has a long life ahead of her.

Your gift to the Children’s Miracle Network Hospitals program at Texas Children’s makes it possible for us to provide the best care for children like Leigh Ann.