At three years of age, Rory underwent her fifth open heart surgery. Despite the odds, Rory’s surgeon was able to do what seemed impossible—repair her heart in a way that could give her a future.

She was born with complex congenital heart defects, lung issues, and Down syndrome.

Rory Hanes’ journey started prenatally, when her parents, Christine and Scott, transferred care to Texas Children’s, so she could be in the best hands possible.

When Rory was born on July 24, 2014, she had multiple heart defects including an extremely large hole between the bottom two chambers of her heart, a severely narrowed aorta and one common atrioventricular (AV) valve, instead of two separate valves. Since babies with this condition are rarely discharged from the hospital without having surgery, Rory spent her first three months after birth in the hospital. 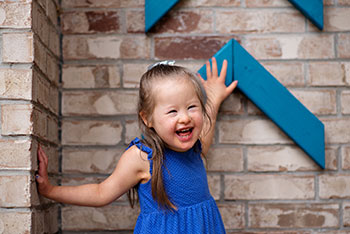 A photo of Rory Hanes

Her surgical path, however, wasn’t as straightforward as initially expected. By the time she was 18-months old, Rory had to have two more heart surgeries. Although the surgeries were able to keep her alive, they did not offer a lot of hope for her long-term survival. To add to the complexity of her heart issues she also had pulmonary hypertension, which impacted surgical options.

At three years of age, Rory underwent her fifth open heart surgery. Afterward she had a hard time getting back on her feet and had been in bed for 13 days, not feeling motivated to walk. Then one of Texas Children’s therapy dogs, Bailey, came for a visit. Within 30 minutes, Rory was walking down the hall to get to the irresistible Golden Retriever.

Despite the odds, Rory’s surgeon was able to do what seemed impossible—repair her heart in a way that could give her a future. While Rory will have to undergo more surgeries in her future, she now has options that her family could only have dreamed of when she was a baby.

Rory’s parents say that she may have been born with a broken heart, but it hasn’t stopped her from living life. She loves music and attends dance class, plays sports, and has friends she adores. Rory is also feisty, sweet, and very opinionated. She is a pro at giving her dolls medicine and listening to their hearts and lungs. “So on top of getting great medical care at Texas Children’s, she also learned how to give it,” Christine said.