Asher Matthews received a breakthrough surgery before he was even born. Asher’s diaphragm had a hole in it, and most of his abdominal organs had entered his chest, making it difficult for his lungs to grow and develop properly.

It was the news Kylee Matthews and her husband waited to hear: “It’s a boy!” Sadly, their excitement soon turned to concern.

“I’ll never forget the look that came over the technician’s face as she was performing my sonogram,” Kylee remembered. “I knew something was wrong, and my heart sank.”

Kylee’s fears were confirmed. Asher, her baby boy, had a very severe, life-threatening condition called a congenital diaphragmatic hernia. Asher’s diaphragm had a hole in it, and most of his abdominal organs had entered his chest, making it difficult for his lungs to grow and develop properly. 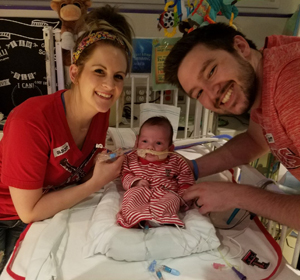 “I had never even heard of this condition before,” Kylee said. She and her husband were given very little information about how they could help their unborn child. They left the doctor’s office in a panic, not knowing what to do — until they found Texas Children’s Hospital.

“Texas Children’s gave us so much hope,” she said.

Our doctors performed a breakthrough surgery — before Asher was even born — to allow his lungs to grow. In fact, Texas Children’s is one of the pioneers in this surgical technique. It gave Asher a head start so that once he was born, he could have the surgery to repair his hernia.

Two days after he was born, surgeons repaired his hernia and placed his abdominal organs back into his abdomen. It was no small feat, but as Asher healed, our staff worked to keep his airway open and help him breathe, until the day he was strong enough to breathe on his own.

“After 193 days in the neonatal intensive care unit, we were able to bring our happy miracle baby home,” Kylee recalled. “I can’t put into words how grateful we are for our team of maternal-fetal medicine specialists, neonatologists, nurses, respiratory therapists, surgeons, fellows and many more.”

Kylee admits that the NICU was a scary place to be, but the nurses there always made her feel comfortable. “Through all of the ups and downs, I’m so thankful to share that I have my happy 13 month old baby with me at home at last. I don’t think I’ll ever be able to thank our team from Texas Children’s Hospital enough, but I hope each person knows how much they mean to our family.”