Fourteen weeks into her pregnancy, Brittany Watson and her husband, Seth, received terrifying news: there was something wrong with their baby’s heart.

Without surgical intervention, he wouldn’t survive.

Brittany and Seth were devastated. All they wanted was to have a healthy son and to watch him grow up. But soon, their devastation turned to determination. Brittany explains, “When you’re in that moment, you’re desperately seeking ways to help your child live.”

“We started doing our research, and when we looked at the success rates here, we were blown away. They’re some of the best in the country. We were desperate to find the best care for our child, and we knew we would find it here at Texas Children’s.”

When Stockton finally arrived, his Texas Children’s team was ready.

Brittany remembers the joy and the heartbreak of those first few days. “It’s so hard to see your child in such a fragile state.” 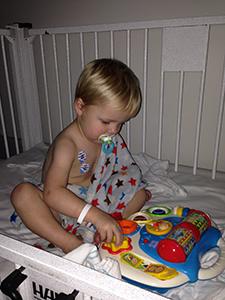 A photo of Stockton in the hospital

Suddenly, after two days in the cardiovascular ICU, Stockton stopped breathing. Doctors were able to revive and intubate him, but they knew they had to operate quickly.

“No one can ever prepare you for something like that,” says Brittany. Still, she and Seth had hope. “The staff at Texas Children’s made us feel so comfortable, so at peace, knowing that with their training and their abilities our son would hopefully make it through the night.”

Brittany attributes much of Stockton’s success to the expertise of the specially trained doctors and nurses in Texas Children’s Single Ventricle Program.

Those first few weeks were like riding a roller coaster. But through it all, says Brittany, Stockton’s team never wavered: “He’d take two steps forward and one step back. But they never ever gave up on him.”

Brittany remembers the pain of not being able to hold her tiny son and the kindness of one of the nurses who suggested she sit and read to him.

“It was little things like that that really helped,” says Brittany. Even more important, the staff involved the Watsons in Stockton’s care, giving them small goals to live for each day... until, they finally got to take their baby home!

Stockton had his second surgery at five months old and his third surgery after his fourth birthday. Every day Brittany and Seth marvel at the “miracle running around their living room.”

Now five years old, Stockton is in preschool. Brittany says that he’s sensitive, sweet, and an amazing brother who he loves to tell jokes and drive his Power Wheels. His smile brightens any room and he fills their family with unimaginable joy.