Meet Lynlee, who was born twice

While in the womb, Lynlee, had a large tumor in her tailbone. Without surgery, doctors feared she wouldn’t survive. Texas Children’s gave her family hope.

The ultrasound technician was too quiet, and Margaret knew something was wrong.

After just 16 weeks in the womb, her daughter, Lynlee, had a tumor attached to her tailbone that was almost as large as she was, and it was stealing her blood supply.

The massive sacrococcygeal teratoma forced Lynlee’s tiny heart to beat faster and faster to force enough blood to the rest of her body. Too small to be born, the baby struggled more each day. Without surgery, doctors feared she wouldn’t survive.

One doctor urged Margaret to terminate the pregnancy, saying the tumor was too large and the surgery too risky. Desperate to save their baby’s life, Margaret and her husband, Jeff, researched hospitals that could remove Lynlee’s tumor in utero.

When they found Texas Children’s Hospital, they found hope. Doctors at Texas Children’s Fetal Center told Margaret and Jeff that open fetal surgery would be difficult. They’d have to operate while Lynlee was partially out of the womb and then put her back in the womb so she could continue to grow. There were no guarantees, but it was possible.

At 23 weeks, Lynlee’s heart could wait no longer. Margaret went into surgery that night.

Open fetal surgery is complex and risky under the best circumstances. Little Lynlee’s tiny heart was already damaged, and it was possible she wouldn’t be strong enough to survive. If Margaret went into labor, Lynlee would be extremely premature, making her odds for survival very low. 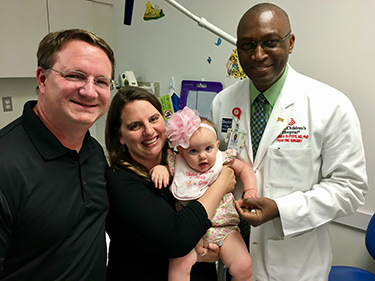 A photo of Lynleee in the hospital

Texas Children’s team of doctors made a meticulous incision in Margaret’s uterus, fastening Lynlee’s amniotic sac to its wall. They needed to mend everything after surgery so that Margaret’s uterus could continue expanding and Lynlee could keep growing.

Surgeons pulled Lynlee halfway out of Margaret’s womb. Her fragile body weighed just 1 pound, 3 ounces and would need a blood transfusion. At one point, Lynlee’s heart stopped. The surgical team removed 90 percent of the tumor before carefully replacing Lynlee and resealing the amniotic sac and uterus. At very high risk of spontaneous labor, Margaret spent the next 12 weeks on bed rest.

Lynlee was born -- for the second time -- by caesarian section at nearly 36 weeks, giving her precious time to grow and strengthen her heart.

“The fact that they were able to put her successfully back in and sew me up and that I didn’t go into labor in the first couple of weeks was a miracle,” remembers Margaret. “Everybody is so amazing at Texas Children’s. We are so thankful. If it weren’t for them, we probably wouldn’t have Lynlee here today.”

Lynlee has a long road ahead. When she was eight days old, she had a second surgery to remove the last of her tumor, but the teratoma had damaged her spine and pelvic muscles, affecting her left leg and possibly her digestive tract. She has weekly physical therapy, and she’ll need regular check-ups into adulthood.

Margaret wants pregnant women to know: “If they go and have an ultrasound and a scan, and they’re given bad news about their baby, they should not lose hope.”