A Race Against Time

When he was just two months old, Brayden was fighting for his life -- and a whole team of caregivers at Texas Children’s was fighting right along with him.

Six-week-old Brayden was vomiting constantly and wasn’t gaining any weight.

His mom, Alyssa, knew something was very, very wrong, but she couldn’t convince Brayden’s doctors. After an ultrasound of his stomach came back clear, they sent Brayden home, telling Alyssa to bring him back in a week to check his weight.

“I was pretty discouraged because I felt sure there was something else going on,” remembers Alyssa. “I just didn’t feel like it was settled.” A week later, Brayden was getting worse. Alyssa kept pressing his doctors. Then she thought to ask about his heart.

And that was the question that would ultimately bring Brayden to Texas Children’s Hospital in Houston. Brayden’s father, Nick, and several family members had a history of serious childhood heart defects. Brayden’s heart had been screened in utero, but Alyssa was still worried. 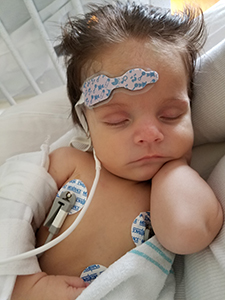 A photo of Brayden in the hospital

Brayden’s doctor thought he heard a slight murmur, enough to order more tests that afternoon, but nothing could prepare Alyssa for the results. Her mother’s intuition likely saved her baby’s life. Brayden had a hole in his heart -- but even worse, he had cardiomyopathy. His heart’s left chamber was enlarged and couldn’t pump blood effectively.

Not even two months old, Brayden had a heart that was failing. Only a transplant could save his life.

There was no time to lose. That night, Brayden was flown to Texas Children’s Hospital, where he could receive the life-saving care he needed.

At Texas Children’s, Alyssa quickly realized what she tells parents today. “If they’re at Texas Children’s, they’re at the best place they can possibly be.” Texas Children’s Heart Center is nationally acclaimed, and many of the now standard pediatric heart procedures were pioneered here. That expertise is vital. Alyssa was also impressed with the personalized attention Brayden received that helped him get well.

At one point, Brayden had to battle an infection that threatened not only his place on the transplant list, but also his life.

“He started turning grey. He was just going downhill really fast,” says Alyssa. The doctors didn’t know if he’d survive the night -- his heart, already weak, was racing. Brayden’s doctor stayed with him and his parents all night.

“He had the doctor’s full attention when he needed it,” Alyssa remembers. “I don’t know how the doctors got him through that, but they did.” Days later, Brayden was back on the transplant list.

Most important, says Alyssa, “They listen to the parents and all of their concerns.” That makes a big difference. Brayden’s transplant was successful, but soon after, Alyssa noticed a lot of swelling. His medical team swung into action, catching a complication that required a second surgery.

Brayden’s new heart may not last forever, but Alyssa hopes science will soon find a way to make a transplant last a lifetime. And, in fact, exciting research happening right here at Texas Children’s includes promising bioengineering that could create heart tissue genetically identical to a patient’s.