When Sam Atchison tells the story of her daughter, Aurora, also known as Ro, you can hear the love in her voice. 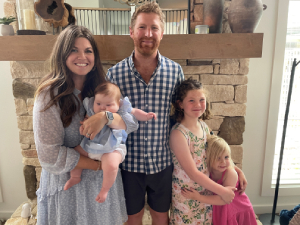 Sam and Jared Atchison and their children: Aurora, Madelyn, and Eleanor

She knows every date, every diagnosis and every doctor’s name as if they were etched on her heart.

But then again, why wouldn’t she? Ro, who is almost one year old, has quite the story of perseverance as a patient at Texas Children’s Hospital.

“When I was 13 weeks pregnant, we learned that there were significant complications,” Sam said. “The medical team noticed that Ro was missing a nasal bone and had an atrioventricular septal defect (AVSD) and fluid on the trunk of her body. We weren’t even sure if she would make it.”

Unfortunately, that uncertainty never went away.

While in utero, Ro had soft markers for Down syndrome and a noninvasive prenatal testing result with a high probability of the genetic disorder. She also experienced two bouts with hydrops fetalis, a build-up of fluid in the tissues and organs, which is often fatal.

“I went in weekly to monitor fetal heart tones, each time not knowing if she’d have a heartbeat,” Sam said. “Our doctors, my OB/GYN and her maternal fetal medicine team really expected her heart to stop. But week after week, she kept fighting and was delivered at 38 weeks. You can’t spell rollercoaster without Ro.’”

The Neonatal Intensive Care Unit (NICU) team was in the delivery room when Ro was born, and a two-month stay in the NICU began. Ro needed to be under careful watch to make sure her heart was strong and healthy enough before going home. 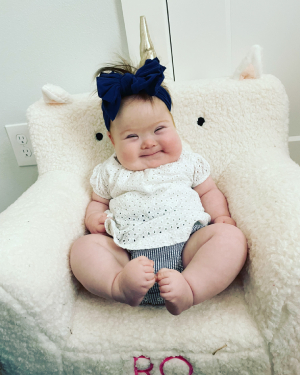 “Leaving your baby at the hospital after giving birth goes against every single maternal instinct there is,” Sam said. “But between my husband and me, we were there every single day. She was never without one of us.”

Sam added that Texas Children’s Newborn Center became a home — not a home that you would ever ask for, but a home just the same. “I know we were in the absolute best place to receive the best care,” she said. “Even on my worst days, walking into the doors at Texas Children’s always made me feel better.”

After two long months, Ro was reunited at home with her mother; her father, Jared; and her big sisters — Madelyn, 7, and Eleanor, 4. Today, she is growing, thriving and meeting her milestones.

“Aurora’s name means dawn,” Sam said. “I think it’s the perfect name for her, because she has become such a light in our lives after so much darkness.”